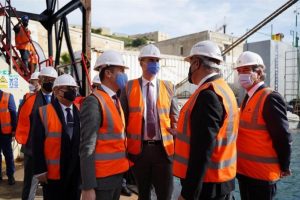 SMM Group, as one of the players in the Maltese maritime industry, is excited to play a pioneering role in the industry’s further development and growth. SMM Group has been working hand in hand with Melita Marine Group, who has officially announced its investment of 5 million euros into operations. The legal knowledge of the industry and professional expertise behind the union are the core elements, without which, success could not have been achieved.

The investment is aimed at strengthening the quality of Maltese maritime and engineering services, which are offered at both local and international levels.

Whilst Melita Marine Group has been offering their services, including maintenance of ships, repairs, refitting, surveys, and many more for 32 years, SMM Group is proud to be the part of this journey and to continue contributing to the development of the Maltese maritime industry from both legal and administrative angles together.

The announcement of the investment by Mr Pierre Balzan has been held in the presence of Ministers Ian Borg and Silvio Schembri, visiting Melita Marine Group facilities at the shipyard in Paola.

“As a government, we are committed to promote a Malta which is renowned as a centre of excellence in the maritime sector, a sector which is increasing its contribution to the Maltese economy while creating employment opportunities.” Ian Borg, Minister for Transport, Infrastructure and Capital Projects & Silvio Schembri, and Minister for the Economy and Industry.